Degoo offers a large amount of free backup storage and for those in a very tight budget might be worth looking into. The free storage does come at a price though, with the desktop app trying hard to install other apps as well at the option for the desktop app to also mine cryptocurrancy for the company. There are better cloud backup services available out there but if you are on a very tight budget or just love the idea of having 100GB of free space then Degoo is for you.

TL;DR The Degoo desktop app is seriously lacking in features such as scheduling, incremental backup and more. If you are serious about purchasing a subscription with a cloud backup service look at Backblaze or IDrive.

The number of cloud backup services offering large quantities of free space can be counted on one hand, and that list is getting shorter all the time. For this reason I was interested in Degoo since 100GB of free backup space is enough to store a fairly large quantity of data. Considering my photos alone are well over 50GB in size it can get expensive to backup and store data. While the draw to Degoo was the large amount of free space it became very obvious that they are doing everything they can to find ways to make money from offering you free space.

As you can see in the video I have embedded below of my testing if the sign up and setup process on a Windows 10 machine the sales start the minute you click the download now button on their website. The first option I encountered was an option to manage my search providers before I started the download. It would be very easy for someone not reading closely to easily install this option and have some browser plugin installed. While it is a little sneaky at least they give you the option to skip or ignore the added install, while other service might just do it for you, I would say just be sure to pay attention to what they are trying to do.
Once you download the installation file and start the setup wizard I was presented with the license agreement and then, surprise surprise, with another option to install even more software that I was not interested in. The nice part was the option to Skip All but the questions did seem confusing on purpose seeming to try and trick a person into installing something they really don’t want. This all before I even got the application installed on my Windows 10 machine. Not a good start to trying this service.

When the setup completed I was presented with the option to create an account I used a temporary email address but you could also use your Google account, which would be handy if you are planning on using the service for awhile. Of course the push of other products continued after I setup my account with a push for Mailbird from their sister company. When the Degoo main application finally started I was presented with the main screen and able to add files the backup, check my account and do other tasks. I easily added some folders to the backup and ran the backup.

I had some issues with my recording software but I was able to do a restore of the downloads folder. You can see the restore process in the video below. I edited the video to take less time than it actually did. The restore process was fairly simple and you can select what folders and files you want to restore.

For the most part the backup and restore process was smooth and quick. I did have some problems getting the app to backup new files that I added to the folders I included in the backup but I did not investigate what the problem was. It could be as simple as I did not wait long enough for the application to start again. According to their website it does appear I was just impatient, since backups are suppose to occur once every 24 hours.

One of the unique features the application does have is the option to get some extra free space in exchange for letting the application mine scrypt based cryptocurrencies. On their website they specifically mention Litecoins, but there are several other scrypt based cryptocurrencies that you can see on Wikipedia that Degoo could mine. When I checked the button my account as automatically granted an extra 10GB of free space. It is an interesting idea for a company that offers free space to use users spare CPU cycles. I can’t imagine they make a great deal from most peoples computers but if they have hundreds of thousands of computers all working together it might make Degoo some extra cash. Personally it is nice to see the company up front about it, they could have just hidden it in the code and turned it on, but if I am going to mine cryptocurrencies I would rather just do it myself.

I also installed the Android app on my phone and gave it a spin for a week or so. To my surprise I was not bombarded with extra apps to install. In fact I was pleasantly surprised with the Android app and wished that the Windows desktop app was more like the Android one. Installing the Android app from the Play Store was not problem and I was able to set what to backup and use the app to browse the existing files from the account on my phone.

The only problem I had with the Android app was browsing files from the existing backup. I noticed that several of the larger files simply were not available to view on the phone. The files were large so perhaps the app was hiding them because there was no way I would have been able to download the files on to the phone. But it could also be the app has a bug and was not showing me everything. If you are using Degoo as a backup I would test it more to make sure it is accurately uploading and restoring files.

I am not overly impressed with Degoo as a backup service. The desktop version, while upfront with offers, seems more interested in installing other software than making the install and backup process run smoothly. The Android app is better but other than offering users a very generous 100GB I see no great benefit to using Degoo for backup. If you are very short on cash and cannot purchase a reasonable account with a better provider or are a poor student, then Degoo is perhaps a good option to consider, other wise I would recommend you look at another service.

The comment by Chris (see user reviews) had me go and take a quick second look at Degoo. The latest experience in trying the free version of Degoo for Windows did not go well. Creating an account was no problem but I was not able to actually download the Windows desktop client without doing one of two things. Giving them my credit card, and to be honest I don’t trust this company enough to give them my credit card. Or I had to spam my friends and family. I opted to spamming my own email accounts to see if I could at least get the desktop client downloaded. No luck. After entering in 10 email accounts and submitting them I was simply redirected back the same page. 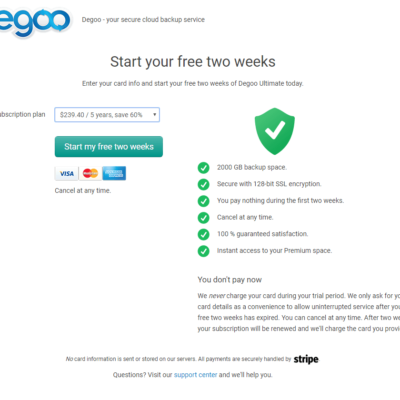 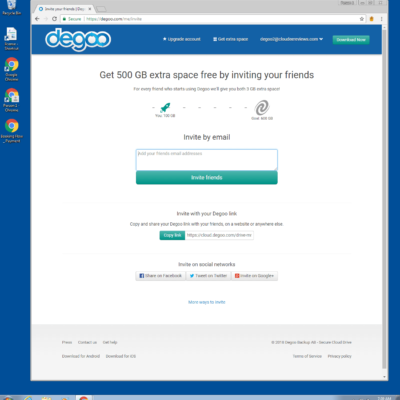 Personally I would not use this service. Requiring a credit card for a free account is not free, and you don’t know what they are going to do with that information. The fact that they want your friends and family email addresses and then still don’t let you download the desktop application seems shady. There are simply to many red flags going up and to many road blocks to trying the service. There are better alternatives that you can try that are free, and better alternatives that cost less.

Offers an easy to use, and most important, secure cloud storage service. Along with desktop apps there are also Android and iOS apps available to allow for easy access to your files from pretty much anywhere.
Rated 5.00 out of 5
$0.00 5GB Free. $49/year. Business starting at $10/month Visit Site 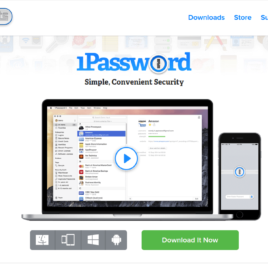 1Password is an excellent choice to keep your passwords secure and easily available. They offer extensions for Chrome, Safari, Opera and Firefox along with desktop applications for Mac and Windows. The app can autofill forms, save your password data and offers tools such as secure password generation. The download is a fully functional demo for 30 days.
not rated $49.99 Free Trial Visit Site 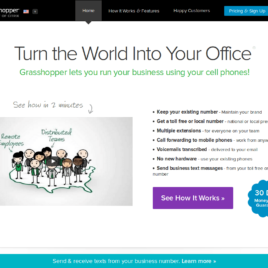 Grasshopper Phone will have your business sounding professional in no time with features like:
not rated $12.00 Paid plans start at $12/month. Visit Site 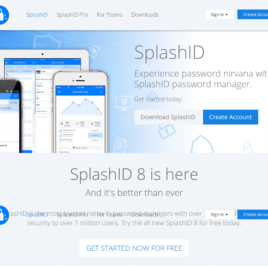 SplashID is often considered the best password manager available. You can get basic functionality for free on one device but for only $19.99/Year you get features like password sync, access on any platform and password sharing.
not rated $0.00 Pro Starts at $1.99/Month or $19.99/Year Visit Site